In addition to the SLR product profile, this time Nikon launched the first section Action Cam’s interesting. Because this KeyMission 360 once direct “top attack”, support to shoot 360-degree panoramic photos and videos, even up to 4K UHD resolution video quality. KeyMission 360, the biggest selling point of this product is that he supports 4K UHD video and 360-degree panorama shooting. So the hot topic about this camera has already started. This article below is mainly talk about how to edit KeyMission 360 4k UHD video for uploading to Youtube.

The KeyMission 360 from Nikon is a compact and rugged action camera that features dual lenses and image sensors to capture full 360° video and photos in UHD 4K resolution. This allows you to relive your adventures from every angle and share new and unique perspectives with family, friends, and fans. Built to withstand the elements, the camera is waterproof to depths of 100′, shockproof from drops up to 6.6′, and resistant to dust and low temperatures. The camera also features built-in Wi-Fi and Bluetooth connectivity as well as electronic Vibration Reduction (VR) to help reduce the effects of shakes and jitters from body- and vehicle-mounted action footage.

However, if you want to upload the KeyMission 360 4K UHD video you shot to YouTube, the first thing you need to know is what video formats YouTube support. Even though YouTube accepts a variety of video formats, there are still some video formats being booted out. As we know, it’s stated by YouTube that MP4 is the best format to use. And the Best video format for YouTube: H.264, MPEG-2 or MPEG-4.

How to edit KeyMission 360 4K UHD video for uploading to Youtube?

To activate the “Edit” menu, you have to select an item first. When a video file is selected, you can click the “Edit” icon  on the tool bar of main interface to edit selected file.
On the “Video Editor” Window, you can play and preview the original video and output effects. Also you can flip video, trim, add 3D effect, reset, and adjust volume. 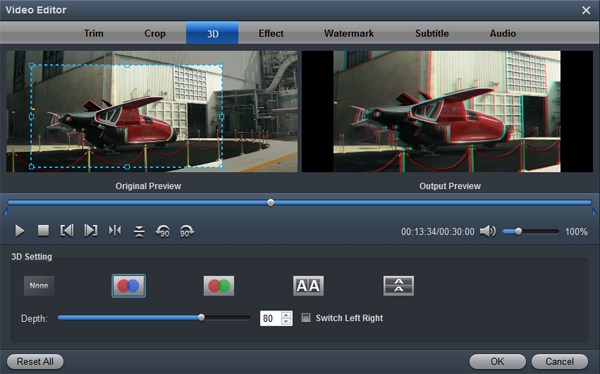 How to convert KeyMission 360 footage for editing software?

After the video conversion, you need to click “Open” button to find the converted videos. Then you can upload KeyMission 360 4K UHD video to Youtube easily.