Vizio P-Series TV is released not long ago, this is the latest smart TV from Vizio. Many users are attracted by the Vizio P-Series TV’s excellent overall image quality, it uses true 120Hz panel which can handle both HDR10 and Dolby Vision high dynamic range sources. If you’re looking for the best picture you can afford, and you can’t afford an OLED TV, we recommend you to choose Vizio’s P-Series TV. You will get very good video quality with Vizio P-Series TV when you use it to play videos or movies.

Can I play Blu-ray on Vizio P-Series TV?

As the best Blu-ray ripper on Windows and Mac computer, Acrok Video Converter Ultimate is quite outstanding for converting Blu-rays to MP4, MKV, AVI, MOV, etc formats at fast speed and keeping original quality. Besides, it is able to copy your Blu-ray to hard drive with original structure or main movie only, you can even choose the chapter you want. What’s more, some video editing features like cropping, trimming, adjusting video effects, etc. are provided to customize your Blu-ray movies before conversion. Now just click the download link and get the Blu-ray Converter now, with just few clicks you can watch Blu-ray movies on Vizio P-Series TV via USB port.

Step 1. Download Acrok Video Converter Ultimate for Windows, it will run on Windows 10 or Windows 7 computer. If you are using a Mac and want to copy Blu-ray to Vizio P-Series TV on Mac, please download the Mac version Blu-ray Ripper software.

Step 3. Choose output format according to your need. Click Format bar and choose “Vizio HDTV Video(*.mp4)” from HDTV category, this format can be recognized by Vizio P-Series TV perfectly. 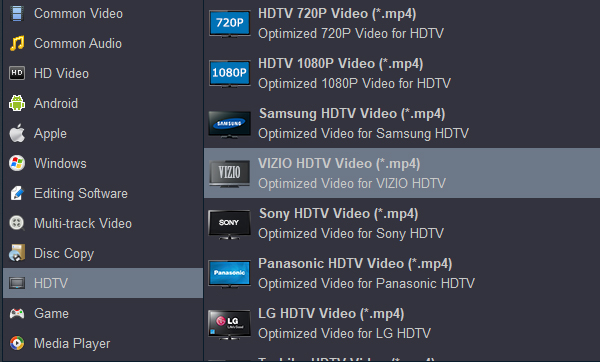 Step 4. Change advanced settings as you want. Before convert Blu-ray to Vizio P-Series TV, you can retain the quality of the original Blu-ray while also saving space. You can click Settings button and you can tweak the settings like video resolution, bitrate, frame rate, etc to your satisfaction. Just change them according to your need.

Step 5. Start ripping Blu-ray to Vizio P-Series TV. Click the “Convert” button at the bottom of the main interface, the software will start the conversion.

Acrok Blu-ray ripping software will automatically convert Blu-ray to Vizio P-Series TV compatible files. Wait some time, when the conversion is finished you can open the output folder and find the converted movies. And then, put the converted files onto USB flash drive, now you will be able to watch Blu-ray movies on Vizio P-Series TV via USB port, there will be no problems anymore.