Are we really need a 4K projector right now 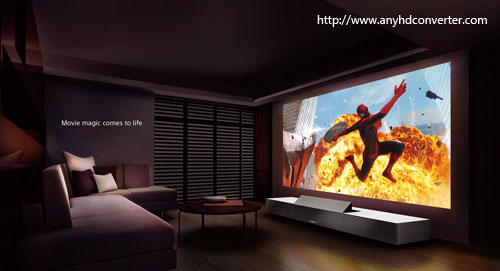 In fact it is not a new topic when mentioned 4K, in order to sell well Whether LCD TV or monitor, it seems to have to bring the words “4K”. But for the projector, whether it is HD home projector or hot intelligent micro-investment now, seemingly rarely heard the sound of the 4K. Why is this? Does 4K resolution exactly has practical significance at present? Today we’ll chat on the display in the field of 4K.

4K resolution is known as the new generation of Hollywood standard resolution, with 4096 × 2160. It is four times that of conventional 1080P resolution, the pixel upgrade from 2 million to 8 million. In theory, it can bring the audience more vivid yet delicate display details, but in fact, if you have watched the movie 4K, Only to find that the actual effect is not imagination of so good, because the distance of cinema, make 4K movie looks so ordinary and there is not much difference with 2K film. If there is no prompt, you probably think this is an ordinary movie.

Whether large size LCD TV or display even the projector, in fact all belong to display type of equipment. But on one side is 2k, 4k, 5k display to change the pattern of innovation, but on the other side of the projector mainstream resolution is always 1920*1080. There is no 4k projector?

No, Sony VW1100ES, VW500ES, VW300ES, HW40ES, etc, these several models are all 4K projectors, rare product belongs to the industry. So why the promotion and popularize about projector 4K resolution is not as good as monitor and LCD TV?

Firstly, the product positioning on HD home projector and intelligent micro-projector  are not the same as LCD TVs and monitors. We buy high-definition projectors and smart micro-investment is mainly used to watch movies at home, because after all, the projector can be easily cast out of a two hundred inches of the big picture. If conditions permit, there is no problem that you want to set up a private theater at home. While watching a movie it may involves the sources problem in the first place, mainstream movies, videos also are 1080P format, so for the projector, there is no good reason to rush blindly promote 4K products. So why do so few sources 4K?

In fact, whenever 4K monitor or 4K TV, and today’s leading role 4K projector, are faced with a problem which  is hard to find 4K sources. This 4K display device situation is rather embarrassing, meaning a little powerless. Many friends may ask why the film company not shoot 4K movie. The reason is very simple, in a word, expensive!

Upstream screening technology monopoly, led to the shooting a 4K film is very expensive. Only a 4K cinema projector to spend a million or more is very normal, so there is a direct impact on the number of 4K screens worldwide. Major theaters don’t buy the high cost 4K cinema projection equipment. And the number of original sources is on rare, so there is no need to spend lots of money to upgrade the screening equipment.

In fact, in addition to costs, the effect of 4K movie experience is a major constraint. To experience the effects of 4K high-definition, large screen and a proper distance is essential. 60 inches above 4K images to ensure that within 1 meter distance viewing may feel the fine quality of 4K. This seems to be a big challenge for our eyes.

Honestly, practical experience is no significant difference with general 2K. Even the theater’s giant screen, due to distance reason, we are unable to let the audience experience the vivid and delicate kind of propaganda. In addition we mentioned above 4K film itself some bottleneck, so for the projector, why not large-scale popularization and promotion about 4K products the same as LCD monitors and TV?

From a technical point of view, today’s high-definition home projector majority have adopted the DLP technology, which is mainly based on the Texas Instruments (TI) developed digital micro mirror DMD chip. And one of 4K DMD chip prices in the hundreds of thousands around, the Cost is too high for the projector manufacturers. So even introduced a 4K projector, few users are willing to buy. Therefore, 4K projector is not able to be marketed as a flagship product.

Currently, the 4k stunt is bigger, but lack of sources of support, promoting is more easily but hard to avoid some small practical experience. However, for HD home projector or smart mini projector users group, the original intention of buying was to enjoy the happiness of a small theater at home. So the current HD projectors in the aspect of hardware more is through the innovation of the light source such as laser and six sections of the color wheel to improve precision of brightness and color reproduction. While in the aspect of content through the built-in intelligence system to increase the richness of the film and television resources, to meet the actual needs of the users really watch films.

Saying so many questions about 4k; return to the theme of the article, 4k projector can achieve universal access in the future? Of course sure, as a display device, the popularity of 4K projector on the one hand, subject to the cost of the 4K DMD chip, The price of 4 k projector most core DMD chip is relatively expensive, a short period of time, the projector manufacturers don’t have to large-scale promotion of 4K projection products. For home users, the projector manufacturers more or focus on the entry level 1080 p projection and intelligent projection, because they are more able to meet the immediate needs of the user to watch movies.

In addition to technical reasons, on the other hand the more important is the popularity of 4K sources, Like 1920 × 1080 resolution, the current mainstream movies, 1080 p movie large-scale popularization, so that the playback device must also support hardware. Therefore, 4K projectors can be described as the relationship between sources of concomitant. Otherwise, if there is no 4K source, even though the popularity of high-definition 4K projection seems there is not much practical significance.

Summary: This article more through reading 4K film faced all sorts of problems, including shooting, showing the high cost, Poor actual viewing Status quo. Analyze why the projector industry Why did not like popularization 4K equipment the same as the other display devices such as LCD TVs and monitors. Apart from the cost of the core technology, wanting to popularize 4k projector, I’m afraid I still need to wait until 4k content into the mainstream of the day.